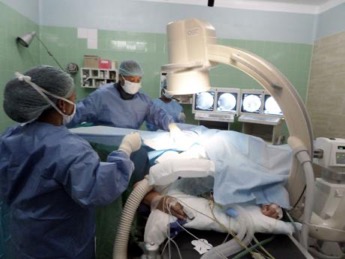 Medical history has again been made in Jamaica with a local team, led by Dr Roger Hunter, carrying out a complex spinal surgery – SEXTANT Percutaneous Lumbar Fusion; the first such procedure to be done in the island.

The surgery was done on December 23, 2014 at the Mandeville-based Hargreaves Memorial Hospital, which has been forging ahead into new horizons with advanced cutting-edge technological medical procedures.

Gordon was suffering from lumbar instability, with severe nerve compression, and underwent surgery which lasted 14 hours.

Nine years earlier, Gordon underwent a traditional open surgery – laminectomy – here in Jamaica, but after one year, was left with excruciating, debilitating pain and scores of tablets which offered only momentary, fractional relief.

Another open surgery was deemed too dangerous at her age, and there was no option for correction as no one was available locally who was trained in Percutaneous Keyhole Lumbar Fusion.

Minimally invasive keyhole spinal surgery describes surgical procedures that are performed on the spine with minimal disturbance or injury to soft tissues around the spine.

The incisions are around one sixth the size of those of the traditional open-back surgery, and it allows the patient to recover more quickly, experience less pain and blood loss and a faster return to normalised living without the need for a back brace.

According to Hunter, Gordon was standing and walking approximately three hours after surgery, without any more leg pain, having tea, and was able to go home three days after the operation.

Though a less-invasive surgery, the complexities required greater detail, technical applications and expertise, hence the long duration of the operation.

“Her age proved a far greater challenge, as she had multiple degenerate joints (shoulders, neck, left knee), which made positioning much lengthier – taking three times as long,” explained Hunter. “Her badly twisted spine made screw placement and Sextant rod passage much more challenging,” he added.

The new procedure has corrected Gordon’s ailment and has set her back on her feet in quicker time. “Her hospital stay has been more than cut in half, with no need for a blood transfusion or the usual copious cocktails of heavy doses of potent painkillers. Typically, patients can return to non-physical work seven days after surgery, well within the average time for typical fully paid sick leave and, overall, a much faster return to better productivity,” said Hunter.

Hunter is a consultant neurosurgeon and spinal surgeon at Hargreaves Memorial Hospital. He graduated from medical school in 1996 with a MBBS Honours Degree, gaining both the Allenbury Prize in Medicine and the Glaxo Clinical Award for the top performance in the clinical examinations.

In 2006, Hunter was awarded the Braakman Award for the top performance in the European Final Board Examination of Neurosurgery in Luxembourg and has passed three final regional and international examinations in neurosurgery.

He completed a complex spinal fellowship at the world renowned Walton Centre for Neurology and Neurosurgery, working with Crispin Wigfield, and immediately after, did post-fellowship work with Professor Steve Gill – both of whom helped to invent the artificial cervical disc (Prestige-Medtronic), which has been successfully introduced in Jamaica .

Hargreaves has advanced the development of its medical services, as well as its surgical offerings, while partnering with major medical technology advocates, both locally and internationally.

As a result, Medtronic (the world’s largest medical technology company, which supplied the SEXTANT) were in the island to support this historic case for Jamaica.

Also present were representatives of the Medical Technology Jamaica Company to witness and help with the SEXTANT kit, being used for the first time in the island, during Gordon’s procedure.